Is work spinning out of control? 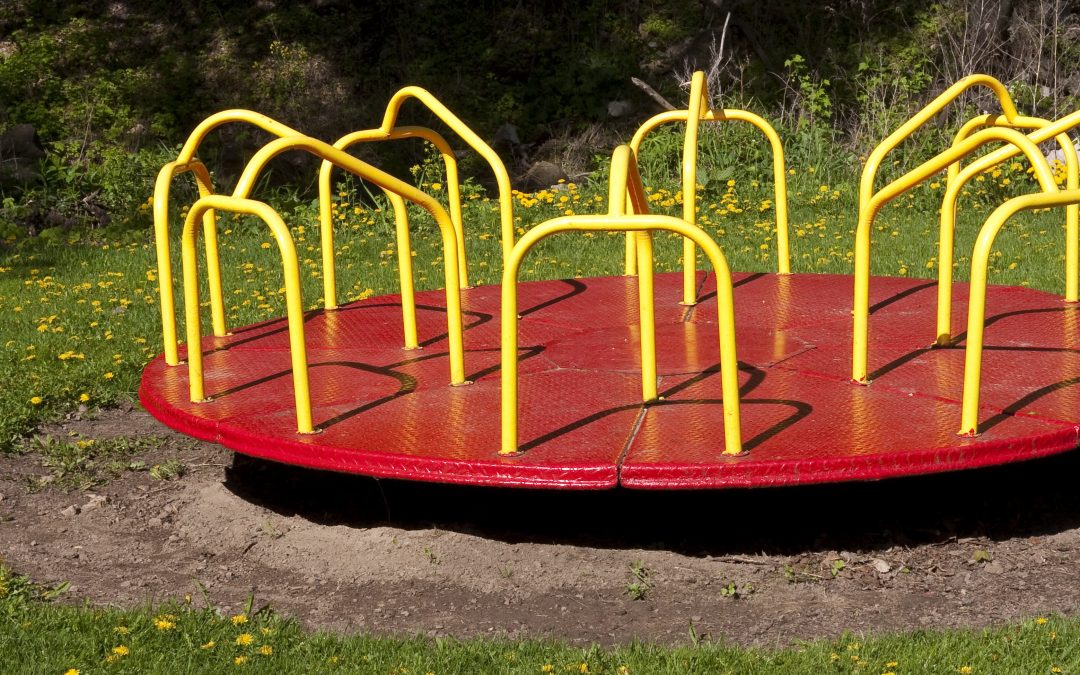 When I was a kid, playgrounds had these merry-go-rounds on them. They weren’t carousels with the jumping horses and music that were found at the county fair. They were simple, kid-powered, spinning group toys. There were bars along the edge that you would hold onto as you ran alongside the thing, to get it going really fast. Then you’d jump on and either sit against the bars, or if you were brave, you’d lean out between the bars to feel all the wind in your face. There was an optimal speed.  Too slow, and it was boring. Too fast, and it was slightly terrifying.

These merry-go-rounds offered my first lessons in group dynamics. Playing on it alone was no fun – it took at least 2 of us to get the thing really going, so you had to find a friend to work with. But if there were a bunch of rowdy kids making it go as fast as it could, that could be pretty miserable, too. They’d run really fast alongside it, showing off how strong they were until it was spinning way too fast. And then, we faced a terrible choice: stay on, despite feeling dizzy and kind of green around the edges, or jump off and risk skinning your knees as the force of it flung you onto the gravel.

In talking with my clients and observing the business world today, I see a lot of parallels to those playground merry-go-rounds.  In an effort to keep up with ever shifting markets and technology, businesses are spinning faster and faster. There’s a bravado to that, just like there was for those kids on the playground. “Let’s see how fast we can make this thing go!” For some, it’s a breathtaking, fun experience. But for many, many others the pace is out-of-sync with their lives. They’re left clinging to the bars, trying to figure out how long they can hold on, or if it’s worth taking the risk to jump off.

I was in that position early on in my career. I worked for a large consulting company where the informal motto was to “work hard and play hard.”  It was fun for a while, but after a couple of years the pace and the pressure got to me.  At that moment, I felt my only choices were to stick with it, hanging on for dear life, or jump off.  One day when things had gotten really bad, I jumped, and it skinned up my ego pretty good. I had the emotional equivalent of those bloody knees on the playground. It took quite a while to fully recover from that experience — to gain back my self-esteem enough to find my next job.

Since then, I’ve watched many other people face that same dilemma – where the quantity of work coming their way is simply unsustainable, where they feel overwhelmed by the belief that they have to do it all. Their work and their lives start spinning out of control. Their days become a blur of work and avoiding work to try to escape the pressure of it all. They work until they can’t stand it, and then they disconnect, turning to different forms of “numbing” – alcohol, tuning out in front of the television, comfort food. They procrastinate, stealing some time for themselves by putting off their work, which only increases the pressure later on. Their performance suffers. Their health suffers. Their relationships suffer.

And it breaks my heart, because it honestly doesn’t have to be that way. Jumping off at full speed, or holding on for dear life are not your only choices.

There’s a third option, and that is to put your foot down.

When that merry-go-round was spinning too fast, you could slow it down, if you really put your heart into it. You had to hold on really tight to the bar, and then lean over and ease your foot down onto the ground, so that friction could do its job. It was a dangerous maneuver, because if your grip slipped, or you didn’t get your foot down just right, you could end up getting some part of you caught under the spinning platform. But it worked.

The same can happen in the workplace. There are ways you can put your foot down when your work is spinning out of control. Just like on the playground, it takes courage, and it takes a careful strategy, so you don’t get hurt in the process. But it can be done.

with your boss and others in leadership, so they know you, and trust your judgement. When they don’t know you, it’s easier for them to dismiss your concerns as whiney or unprofessional. But if you’ve built trust with them, and your reputation is solid, then when you say you need more resources or more time, they’re more likely to listen
$

so you can see that what’s going on isn’t just about YOU. This was what was missing for me when I left that first job. I wasn’t able to step back and see that the work was set up in a way that required crazy hours, with high-pressure deadlines.

This last piece, the systems perspective, is something I’ve helped a couple of my clients with lately. They both work in client-services organizations where there is a lot of pressure to deliver. And interestingly, both of them are in charge of divisions whose services are slightly different than the rest of the company. One of the things that we’re discovering as we walk them back off the ledge of feeling incompetent and insufficient is that the way the work is structured is problematic. What’s offered to clients, and the pricing around it, and the staffing – none of those pieces have been adjusted for how their part of the business needs to go to market.

The challenge is this: when we’re in a place where we think that WE are somehow the problem, we’re not able to step back and see the bigger picture. The truth is, the way things are set up now, anyone in their roles would be failing.

The leadership moment that my clients are facing, and that I’m helping them through, is to step back and see what’s happening outside of them so that they can begin to address those bigger issues.

Putting your foot down about the quantity, pace or structure of your work is an act of leadership, for yourself and for the people around you. I remember feeling so grateful for the brave big kids who would risk life and limb to slow down that merry-go-round. And I tried to do the same for the little ones as I got older. Making choices about what you’ll work on and what you won’t, defining what you need to be successful, managing up and gaining support can make life in your organization more sustainable for everyone. As a result, you’ll get better performance, more job satisfaction, more loyalty and retention and better engagement.

Whatever’s happening, putting your foot down is no guarantee that the organization will change, and that you’ll end up staying. On the Merry-go-round, sometimes it happened that when we’d slowed it down, other kids playing on it that day really did want it to go faster. That was okay. Once it had slowed it down for a minute, those of us who wanted to could step down safely. Stepping down is very different from jumping off. You’re much less likely to get hurt in the process, like I did when I jumped ship on that job.

Sometimes your organization will go along with your requests and you’ll be able to stay.  Other times, you may find it’s time to shift your situation – whether that’s taking on a different role, or working for a different boss. You may even find it’s time to leave the company and go work somewhere else, for a company with values that are more aligned to yours, a culture that’s a better fit and a role that’s better situated for success. In any case, when you’ve shown up in your full executive presence and proposed a systemic intervention, you’ll be in a better place. You’ll be better able to make the shift with dignity, and with your self-esteem intact.  And that puts you in a much better position to look for your next role, from a place of strength and confidence.

If you feel like your work life is spinning out of control, book a call with my team. During the call, you’ll look at your current situation and uncover what it will take for you to put your foot down so that you can move ahead in your career in a way that works for you. If I can help you as you take that step, you’ll talk about what that could look like, and if not, we’ll point you to other resources who can. Either way, you’ll walk away with clear next steps to create the work life that works for you. Book that free call here: https://www.zmcoach.com/apply