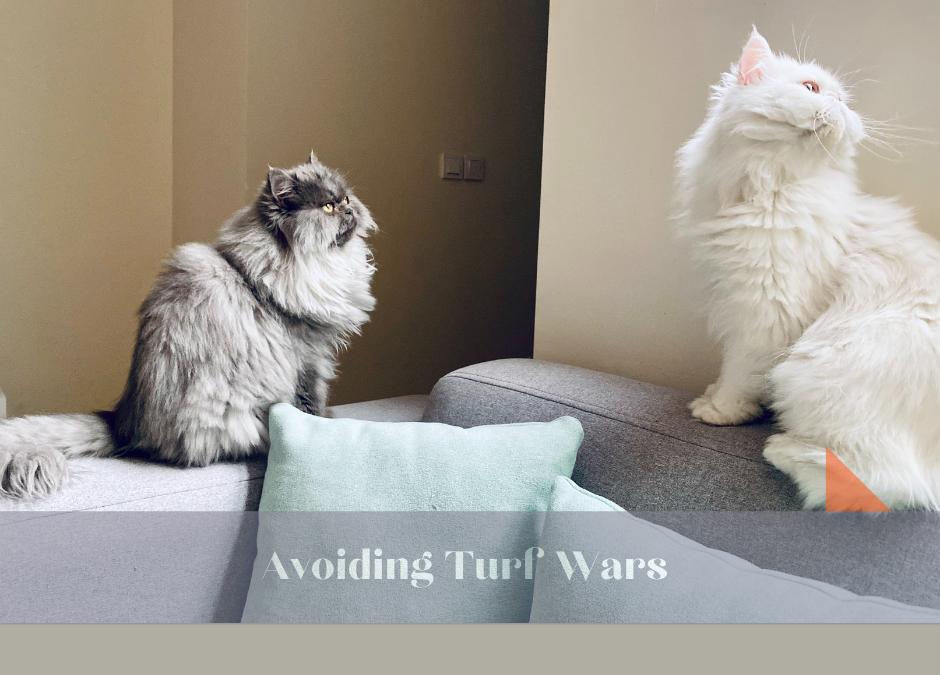 One of the most challenging patterns in organizational life are the “turf wars.” Especially if you’re new to a role, figuring out how to bring in your ideas without triggering unnecessary competition can be tricky. This week we look at that pattern, and why it’s so important to avoid it as you take your career to the next level.

Today’s lesson in leadership is brought to you by my cats.

When my Dad died in December, we inherited his cat, Timmy. We already had a cat and a dog, so it feels like we’re in the middle of major peace negotiations to try to make this work. As a starting point, we have Timmy confined to the den, while our original cat, Lily, continues to have access to the rest of the house.  Timmy is a curious cat, and will often call out to Lily, with little meows that sound like he’s saying, “hello!”  Lily is having none of it.  She sits outside the den and growls at the door. It’s not a very warm welcome.

What’s interesting to me is how Timmy’s appearance has changed Lily’s behavior. For at least the past year since we’ve been working from home, Lily has spent her days in my son’s room.  She hangs out on his bed all day while he’s doing online school, and then snuggles with him whenever he’s available for it.  She has the freedom to come and go and wander around the house, but she mostly didn’t.  She mostly lived in that room – until Timmy came along.

Now that Timmy is in the house, even though he’s only in his one room, Lily has started spending more time out in the rest of the house. She’s started hanging out in the living room. She visits my room, and has even spent the night a couple of times.  It’s as if she’s claiming the whole house as her territory.

Seeing that pattern has me thinking about how much that also happens in organizational life — that people become territorial. This is one of the patterns that crops up in teams. Anytime you’re entering a new organization, or you’re taking a new step – maybe taking a new initiative forward, or expanding your responsibilities, you’re going to be crossing into someone else’s territory. As a result, they may become territorial.

Let’s say you have a project in mind that you want to take on for the organization – an initiative that will bring in more revenue or make a process run more smoothly. You’re so excited about it. You go to meet with the people who need to work with you to make it successful. And they respond with silence or resistance.  They say things like, “That’s not going to work here.” Or “That’s not really how we do things.” Or “I’ve got all these other projects. I don’t have time for that.”

Or let’s say you’re stepping into a new job and you’re getting a feel for your new role and the part you play in your team. You’re in a meeting, and the team is talking about some issue, and you jump in with, “Here’s what we did at my last job, and it was great.” You’re so proud – you’ve helped!  But instead of being pleased with you and excited about your contribution, what you get is, “Yeah. That wouldn’t work here. You don’t really understand how things go around here.”  Once again, the air goes out of the balloon – you feel deflated.

So why are you getting that wall of resistance?

If people were rational, you wouldn’t get that response. They would see the value of your idea and what you bring to the table. Sadly, people aren’t rational. People are driven by all kinds of underlying dynamics that have to do with power, managing the unknown, change, and establishing a pecking order.

Unfortunately, that reaction comes at a big cost. It stifles innovation and creativity. It gets in the way of improvements.

Whether you’re the one having the reaction, or you’re on the receiving end of it from others, one of the most important things you can do is to recognize that it’s just a pattern. It’s not about you.  It’s just one of the ways that people respond to something new. There are patterns in groups specifically designed to keep out differences. There are predictable ways in which groups try to take over the turf, and expand their territory. These are built into human interactions and group dynamics. Barry Oshry calls it “the dance of the blind reflex.” These patterns are reflexive, built in.

When you know that, you can catch the patterns as they happen. The more you’re aware of them, the easier it is to not take them personally. When you aren’t taking them personally, you can be strategic. You can bring in new ideas in ways that are less likely to trigger resistance. You can maneuver around the territorial responses when they come up. Being strategic often means doing something very different from what our guts want us to do when we’re taking it personally. We want to push back, push harder.  That rarely works. That’s why awareness is so important – so we step out of our side of the dance.

One of my clients was excited to land a new job, in a new part of the organization – but she was also worried about making a good first impression.  She’s a great problem solver and a great thinker — but in the past, she had the experience of jumping in too soon and getting off on the wrong foot with people. So, we mapped out a strategy to help her build trust and connections, before bringing in her ideas. That went a long way toward creating the opening she needed to show up with her full energy and her full excitement and ideas later on.

Knowing how to manage this in your own career – being aware of the dynamics of group life, and being strategic about them – is key to your success.   If that’s not familiar to you, or not something you’re used to thinking about, I strongly recommend that you find a way to learn about it. One of the best ways to do that is to work with a coach who understands those patterns and can help you notice and navigate them. That’s a big part of what I’ve help my clients do for the past 20 years.  If you’d like to learn more, let’s talk.  We’ll dig into your situation, unpack the dynamics you’re experiencing, and identify next steps you can take to move through them with ease.