Avoid the Pitfalls of the Common Information Effect 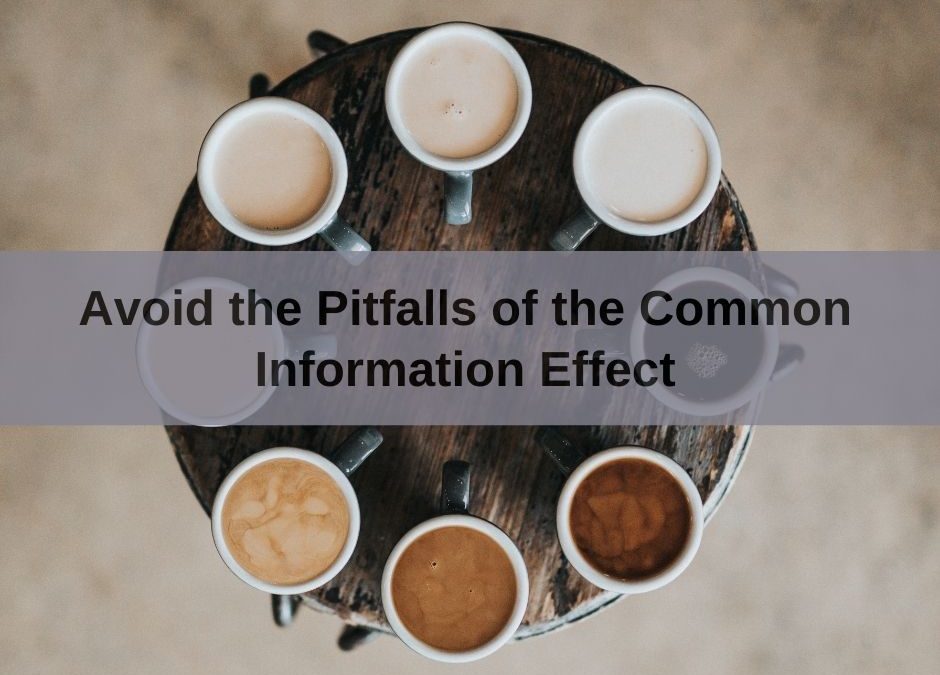 There’s been a lot of talk lately about the value of diversity in organizations. But having a diverse team isn’t enough. To reap the benefits, you need to tap into and leverage the differences. Today we talk about ways to do that.

I’ve been reading Unleashed by Frances X. Frei and Anne Morriss, which I’m thoroughly enjoying. In the book, they mention some research I found really interesting. The research showed that diverse teams do a better job of problem solving than homogenous teams – but ONLY when the team is able to make use of the differences that are in the group. Without an explicit acknowledgement of and appreciation of the differences, diverse groups actually make worse decisions than homogenous ones. This is due to what’s called the “common information effect.”

Diverse here can mean all kinds of things. Of course, it includes the diversity in identities that we usually think of (race, gender, sexual orientation, age, etc.). But it can also include diversity of roles – like a cross-functional team. Another form of diversity to consider are differences in people’s work styles. Last week I led a workshop for a client organization, introducing them to the INSIGHT Inventory, developed by Dr. Patrick Handley. The INSIGHT Inventory is an assessment that looks at four different aspects of personal style:

Differences that people bring to the table across each of these dimensions are really valuable resources for any group to leverage.

Let’s say one of the differences on your team is that some people are really urgent. They like to get things done quickly. Other people on the team are more steady. They like to take their time, to be sure the issue has been thoroughly explored. If you’re working in a way that makes the most of both of those perspectives, you’ll end up with a great balance. On the one hand, you’ll stay in motion, moving forward toward your goals. At the same time, you’ll be considering the issue and weighing the alternatives thoughtfully. If you have a team that has both those styles on it, and you can tap into them, you’ll make much better decisions – better than if you lean toward everything having to be urgent (ready, fire, aim) or everything having to be deliberate (analysis paralysis).

One of the biggest challenges in any group is a propensity to prefer one style over the others. Usually, the group follows the leader. If the leader tends to be urgent in style the team will be, too, and it runs the risk of drowning out the more steady voices. As humans we tend to prefer similarities over differences. That’s why, one of the most important skills you can build as a leader is the ability to recognize your own style, as well as any biases you have in relation to that style. With that awareness, you can then take explicit steps toward creating an inclusive team.

If this is something you’d like to learn more about, let’s talk. We’ll get on the phone for about 45 minutes and talk about where you are in your leadership career, and where you want to go. Together we’ll map out a plan for you to get there – and if I can help you along the way, using these tools or others that are in my toolkit, we can talk about what that would look like. You can book that call at zmcoach.net/call.